After seven rounds of intense online competition, the top eight teams were invited to the live offline finals, two days of high-octane driving action that would see which team would be crowned the 2019 Forza RC Champion.

Williams and Sauber advanced from Group A over Jota and Highlands Racing after a dominant series that saw Sauber's Zoom win three of the four races.

Group B saw Red Bull and Lazarus triumph over Virtual Drivers and Team FRF to book their ticket to day two.

After missing multiple rounds during the online portion of the competition, Red Bull's Laige was the standout player, winning all four races, giving him a combined score of nine wins in 10 races.

The final match between the top four teams got underway and immediately it was evident that Red Bull's Laige was on a completely different level to the rest of the competition. Lazarus, Williams and Sauber were too eager to battle for second place early in the race, reducing all of their speed, allowing Laige to extend his lead on the pack. Leading start to finish, Laige comfortably cruised through to his first win of the finals.

In the second race on the Nurburgring, Red Bull had the top seed, and Laige once again started in pole position. Laige and Racers both elected to use their boosts in this race and quickly found themselves separated from the pack in first and second respectively. Little by little Racers closed the gap on Laige, but it wouldn’t be enough as Laige once again crossed the line without any real challenge.

In no surprise to anyone, Laige started in pole position in race three at Sebring. Racers maintained second, but he was unable to keep up as Laige continued to widen the gap and pull away. Team Williams' Mitch got in on the action, passing Racers on the sixth lap, allowing him to pull off a second-place finish.

Racers' blunder in the third race allowed Red Bull to extend their points lead heading into the fourth and final race. 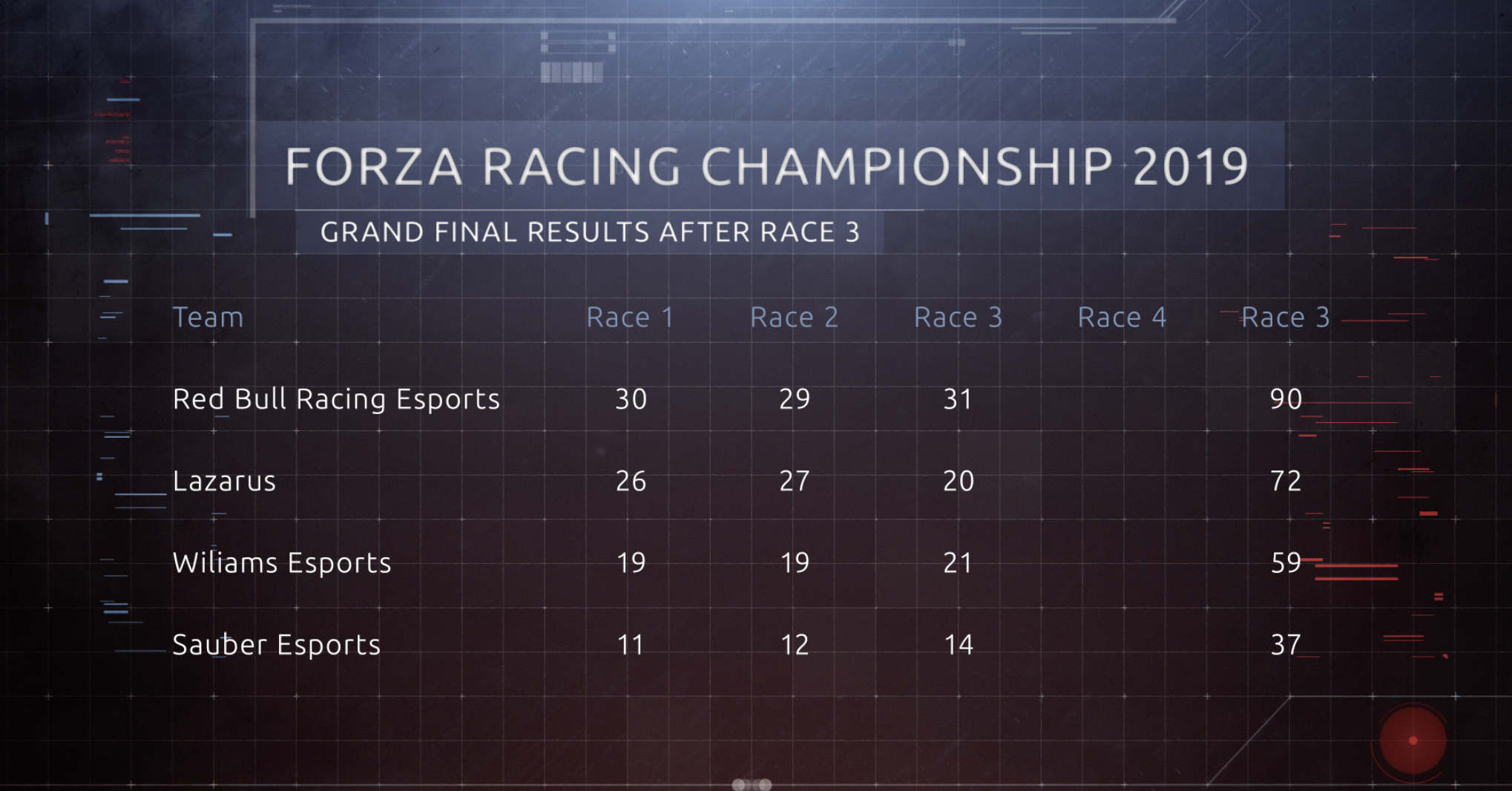 It would be up to Williams and Lazarus to work together if they wanted any hope of catching Laige. Mitch was hot on Laige’s heels for the entirety of the race, but he was unable to make a move as Laige’s pace was far too fast, crossing the finish line in first place one final time and taking home the championship for Red Bull Racing.

Laige was completely unstoppable throughout the entire weekend, winning all eight races that he competed in, proving that individually he is the greatest Forza driver on the planet.